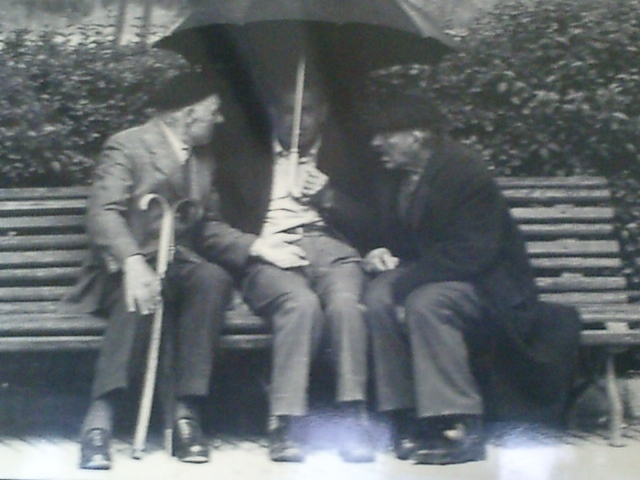 Amidst the melodious clamor of the beis medrash, two chavrusos animatedly discuss a fine Talmudic point. One man asserts his analysis. The other counters; he comprehends the idea in a divergent way. They argue repeatedly and volley their opinions as they become more entrenched in their perspectives. An intellectual tug of war comes alive between them. One becomes more and more convinced that he is correct. The other has no doubt that his understanding makes the most sense. Then, in their spirited discussion, one begins to see a grain of truth in his colleague’s approach. He stops the conversation, closes his eyes and re-contemplates the logic. His brow furrows as he weighs the pros and cons of his partners assertions. He begins to see how it can make sense. Perhaps his friend’s point is on par with his own thinking. Maybe it is even more valid. In a valiant effort to now partially capitulate, the chavrusa offers one of the highest verbal accolades to his intellectual adversary: “I hear what you are saying.” With that brief phrase he virtually embraces his studymate and acknowledges that he is beginning to see merit in his assertion.

The socioculturally unique usage of that phrase has its etymology in Yiddish. There are two words that describe the word “hear.” The first sounds like its English counterpart, “hehr,”  and simply means to “hear.” A more intense version of the word is “derhehr,” which means to hear intensely. In common use, the word “hehr” might be used to connote audibility, that one can physically hear. In contrast, the word “derhehr” indicates intensive listening, or understanding. The verb “derhehr” became so synonymous with understanding and comprehension that it is used as a noun also. One may say, “I have an interesting derhehr,” meaning an understanding or thought. To make matters a bit confusing, the word “derhehr” sometimes becomes shortened back to “hehr,” too. The result is that the word “hehr” – hear – can mean to physically hear or to deeply understand. Do you hear what I am saying?

These two Yiddish words also highlight a powerful truth about conversations and relationships. When one talks to another, the speaker desires one thing over all else – a listening ear. The talker has an intense thirst that his conversational partner can quench. He does not want to simply be heard – hehr. He wants to be derhehred – understood. He passionately wants the other to comprehend his words and his thoughts.

Speakers do not necessarily desire that their listener concur with them. They fervently desire that the other person digest what they are saying, even if he disagrees with it wholeheartedly. Speakers want to be derhehered.

If you are in the role of the listener in a conversation, what might stop you from derhehring the other? True listening entails focusing on the speaker instead of yourself. When someone else is talking, that point of the conversation focuses on him, not on you. Even if you are the subject being discussed, the speaker is usually expressing his thoughts, his feelings, or his emotions – not yours. When you listen, your “I” takes a back burner to the “I” of the talker.

When Moshe Rabbeinu recounts the giving of the Torah, he states (Devarim 5, 5), “I stood between G-d and you.” A Jewish witticism highlights that Moshe is hinting that too much focus on the “I” can separate between one’s self and his connection with Divinity. Interpersonal relationships function similarly. If one feels an overwhelming need to protect his “I,” it can create a large divide in a relationship and prevent him from listening and understanding what a speaker is saying.

Yet, it can be very difficult to put your desire to express yourself on hold and listen to a speaker’s perspective. This is because you probably have your own thoughts and view about what he is saying.Whether you agree, concur with part of what he is saying, or completely disagree, you might feel emotions well up inside of you, eager to be voiced. When you are triggered it can be difficult to contain yourself. The speaker’s need to be listened to seems to pale in comparison to the need you feel to air your reaction.

You might find it difficult to listen for another reason, too. You might feel psychically petrified that the speaker will conflate your listening with agreeing. If you listen to what he is saying with an open heart and a free mind, you can give him the impression that you concur. That might weaken your approach in his eyes. Even worse, if you truly listen, you might be intellectually seduced by his words to accept some of his points. If you do not protect yourself, you might become a traitor to your own convictions!

Listening is the foundation of profound relationships. It means changing a simple “hehr” into a deep “derhehr.” That often takes practice and conscious effort because it entails temporarily stifling your “I” to give the speaker the opportunity to share his thoughts and words. Sometimes being aware of its importance and why it can be so hard can help you embrace this formidable challenge.

Do you hear what I am saying?